Why Android Over iPhone ? 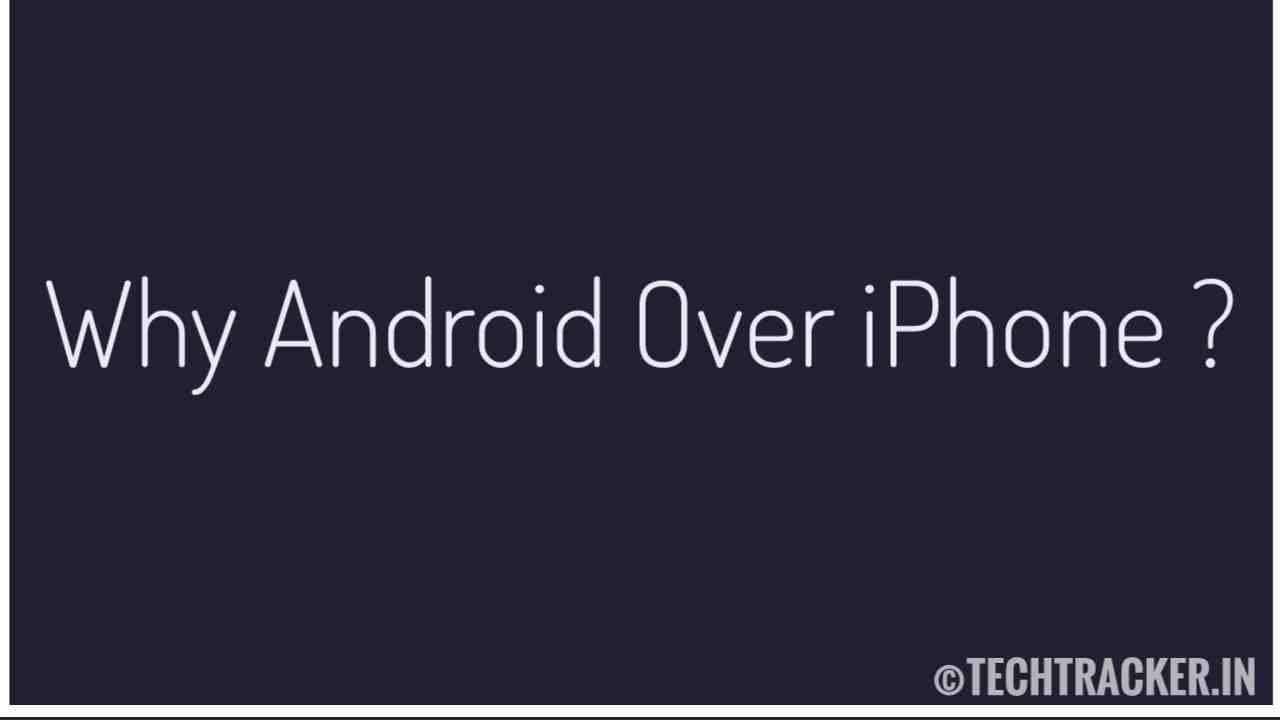 Android have one of the largest smartphone users than anyother comapany in the world there are many things involved and technology aspects are growing day by day being android was a subsidary of google utilising them time to time.
Here in the article we will show why to choose android over iphone if you wanna use iphone follow the below link : www.android.com
Andriod gives you freedom, yes the software is open source anybody can build and modify according to you and release your own version of yours giving accessability to every aspect of the source and it's completely public in the android.com website.
Android have large developer base than iphone you must able to get most of the apps mostly in playstore as it have major audience companies try to get the app in playstore rather than appstore.
Android playstore is improving it's security day by day and it can surely compete with app store everyday.as thier removing apps that have access to unecessary permissions or user privacy robbing apps.
Android supports rooting your phone to install root apps and giving you adminstrative access. So you can do whatever you want and it can give access to load a different software modify anything you want without knowledge you can brick or hardbrick your device.
Android have large custom rom developer community like XDA 4da.ru and many more and it will keep on getting new things as time goes it's gives more interesting things that you can access in android that you are not able to do in iphone.
Android supports fast charging that gives a big plus point and it can replace iphone in anyway.
Android have different companies other than nexus and pixel there are many that use android source so you can get your favorite company phone as most companies launched thier own android phones
Android have many designs from many companies as it gives permission to any company to use thier source by giving credits to android is enough most manufactures have their own hardware design.
Android have its own program for updates like android one which gives minimum two years of updates, if you are worried about updates and price then price was 1/4 of an iphone.
Android phones are less expensive than iphone and it does give variety of choosing options
Android have many manufactures thar release there own customised software skins with android Software adding alot of features like Xiaomi zenui colour os etc if you got bored of stock android you can try these os anytime
Android launched gsi system and now you can flash almost any device gsi image in your smartphone and you just need treble supported device and mostly now new released after 2017 mid support treble.
Android is such software that you can find almost any device that you can find in 50$ smartphone and it can support current android 10 latest version if you have good custom developer support example : moto g 2015
Android keep on working on thier products , like Google voice and google maps can't be beaten by iphones version of imaps and siri etc
Battery android rocks here you are able to find phones that can give you upto 5000mah.
Android gives access to your favorite companies like if you like audio than sony and samsung etc
Android is available in most countries unlike iphone android is less cheap and it continues to decrease day by day.
Android gives access to google photos backup and google cloud etc and it was top notch feature.
Few years before android used to lack in camera quality infront of iphone and it was fixed with google camera in pixels and it's gives you amazing quality that can beat iphone camera in different features.
Android camera in night mode can easily beat iphone and it does managed by Google cam. Android fix things through thier software in multiple ways
Android is developer friendly, the most amazing google camera can be seen ported to several devices even a entry level able to get gcam features that are only available in pixels.
Security these is where android lacks as even in 2019 that visting a link can hack android device and it's still not fixed and law enforcement agencies have to better grip on android as it has larger userbase than anyother as it's very important google trying thier best to keep updating thier security and fixing bugs day by day.
If you want freedom over everything on your device and little lack of security is no problem and like the camera features that offers and customisation and you are on budget then android is a good choice.
Keep supporting : TechTracker.In